Exploit Kits: the Newest and Most Cunning Malware 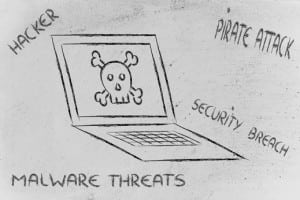 You really have to hand it to cybercriminals for their evil genius. Every year, a new, even more deadly virus, worm, or malware is innovated and disbursed throughout the web, infecting countless small businesses in Atlanta, GA.

Exploit kits are “all the rage right now,” and they can infect anyone. By the end of this article, you will be able to recognize an Exploit Kit, but more importantly, you will know how to defend your small business – not only from Exploit Kits, but whatever leaner, meaner, more diabolical bug that comes out next year.

What Is an Exploit Kit?

Without delving too deeply into the code, an Exploit Kit is a piece of Malware, which can sit on websites without the owner’s knowledge. When a visitor navigates to the site, the Malware starts a protocol in the web browser, which ultimately downloads an unknown file to the visitor’s computer. Antivirus does not stop Exploit Kits.

All too soon, the file executes and quickly takes the computer hostage. The software then asks a “ransom fee” to return the computer to working order. Take a look at this video for a step-by-step introduction to exploit kits. The video actually lets you see each step the Exploit Kit takes to infect a workstation. We should warn you: the video is also an Ad for Malwarebytes, but it won’t infect you.

Tiers of Defense against Malware: How do you catch the new bugs before they strike?

As soon as a new type of Malware or worm begins to infect the web, IT security companies, like Symantec and Malwarebytes take precautionary measures. They update their software to detect and block the new attack. Entrusting your security to one company is a great idea, but we are not satisfied with this level of protection.

We utilize multi-tiered software from different vendors to protect our clients. So that what one company lets through will be blocked by another. Think a bunch of slices of swiss cheese stacked together. Working together, our layers of protection form a gauntlet that catches even the newest threats, because it has multiple top-notch security companies playing defense.

For the best protection, we would suggest any SMB to deploy multiple companies, which automatically update their protection.